The Complete History Of The Air Jordan XI

Claimed by some as the greatest Jordan sneaker, this shoe is no doubt rich in history.

With the retro release of the Air Jordan XI "Concord" around the corner, we decided to explore the history of the Jordan XI.

Tinker Doing What He Does

In typical Tinker Hatfield fashion, the designer focused on the shoe's functionality. Having noticed that Jordan's foot rolled on hard cuts, Hatfield decided to add patent leather for the first time on a basketball shoe. With leather being stronger, the effect was noticeable and was carried right through the upper that featured a nylon ballistic mesh material.

That didn't stop there with Hatfield adding a glossy finish on the patent leather that caught so much attention when the "Concord" colourway was debuted by Jordan on May 7, 1995 for Game 1 of the Eastern Conference Finals against the Orlando Magic.

Other noticeable features include the iconic translucent - 'frosty' outsole which lays on top of the shank plate. And just like the patent leather, Hatfield wanted the shank plate to be tad extra so he made it carbon fiber. Compared to the plastic shanks in the past, this was lighter and stronger catering to the needs of Michael Jordan on court that was supported with a full length Air unit. With the Air Jordan XI, there is a tradition being carried even til this day. This tradition has seen iconic colourways being dropped during the Christmas season.

In 2016, it was the 'Space Jam'. According to Nike brand president, Trevor Edwards called this retro release “the largest and most successful shoe launch in the history of Nike.”

And now after seven years, Jordan Brand are dropping the 'Concord' in time for the upcoming holiday season. Given its grail status, it just seems natural for retro releases to be dropping during a time marked by gift giving.

So considering that Jordan brand purposely releases these shoes during a season high in consumerism, it might be safe to say that they too deem the Jordan XI as the greatest of them all.

Just like the Air Jordan 1, the Air Jordan XI "Concords" were controversial on the basketball court. After deeming to not meet the NBA uniform guidelines for being white, Jordan was fined $5000 each time the shoe was worn.

To say that Michael Jordan performed well in these shoes is an understatement.

The Air Jordan XIs were the shoes worn by Michael Jordan during his and the Chicago Bull's historic record-breaking 72-win season in 1995-96. He then continued wearing these shoes for his championship victory in the 1996 Finals. In the same season, he earned the trifecta as well - winning the regular season, All-Star, and Finals MVP.

For the basketball fanatics out there, that same season saw MJ lead the league in scoring with 30.4PTS whilst also being named as part of the NBA All-Defensive First Team.

Given these accolades and achievements, it is safe to say that in terms of basketball legacy, the Air Jordan XI prevails over all Jordans.

And to add the icing on the cake, look no further than one of the most iconic photos in basketball history. The iconic image depicts Michael Jordan crying on the locker room change room floor after winning his 4th championship. The reason why Jordan was so emotional was because it it was Father’s Day and this was his first championship since his father was murdered in 1993.

The shoe he was wearing you may ask? Jordan XIs.

For those who aren't familiar with NBA history, Michael Jordan retired from the Chicago Bulls in 1993 to pursue a short stint in Minor League Baseball. After returning to the game towards the end of the 1994/1995 regular season, Jordan wore number 45 since the Bulls had already retired the famous 23 the year before.

However, that all stopped in Game 2 of the 1994-95 Eastern Conference Semi-Finals (one game after debuting the Jordan XI Concord).

In the final seconds of Game 1 Orlando Magic guard Nick Anderson stole the ball from Michael Jordan which lead to a fast break dunk that put the Magic up by one with 5.9 seconds left. In a cocky postgame interview Anderson said: “No. 45 doesn’t explode like No. 23 used to.”

Refusing to accept this insult, Jordan returned to Game 2 wearing his original number 23 and finished the game with 38 points. However, just like Game 1 the NBA was not happy with the quick number change within the playoffs and fined the Bulls $25,000.

Whilst him and the Chicago Bulls ended up losing the series, the statement he made in this series with the Air Jordan XIs and jersey number was cold.

Air Jordan XIs Off The Court

Whilst there is an official colourway known as the "Tuxedo", Jordan was quoted for saying someone would wear the sneakers with a tuxedo. Funny enough, a few months later and Boyz II Men made an appearance at an awards show wearing the sneakers with tuxes.

However, this is so surprise given Hatfield's plans to create something that Jordan would wear both on and off the court. And this intention makes sense when looking at the shine of the patent leather which gives the shoe an overall formal aesthetic. 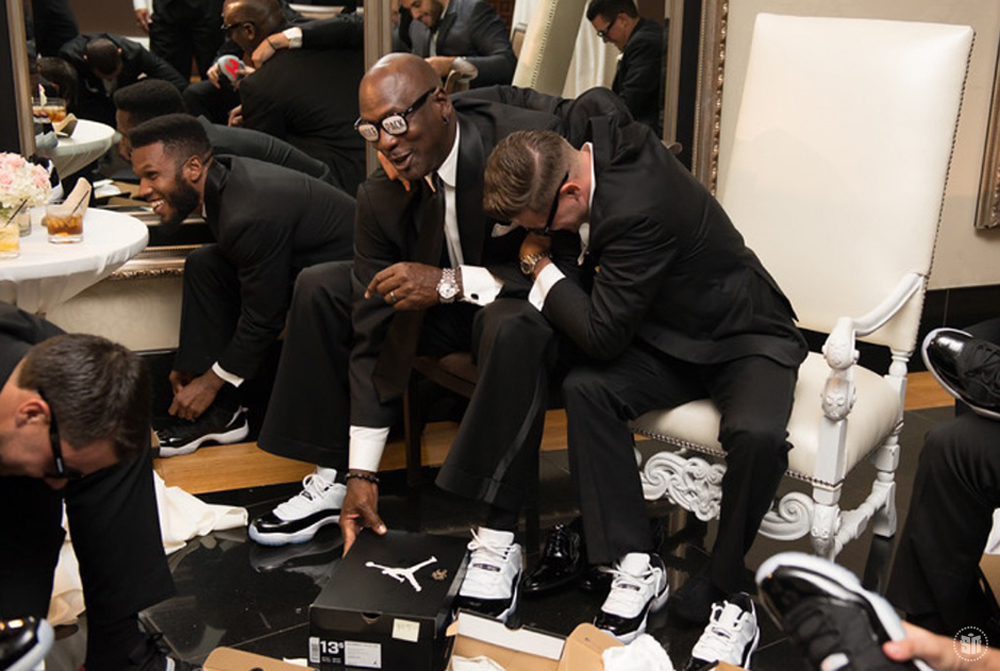 As stated initially, the Air Jordan XI is an iconic shoe - and not just to sneakerheads. The shoe's prominence in Space Jam in 1999 is a reflection of the sneaker's cultural influence at the time.

Unlike the previous Jordan models that had an appeal particularly to those fond of sneakers and/or basketball, the Jordan XI Space Jam had a widespread appeal. It challenged the norms of Jordans being catered to just basketball players and fans or sneaker enthusiasts. 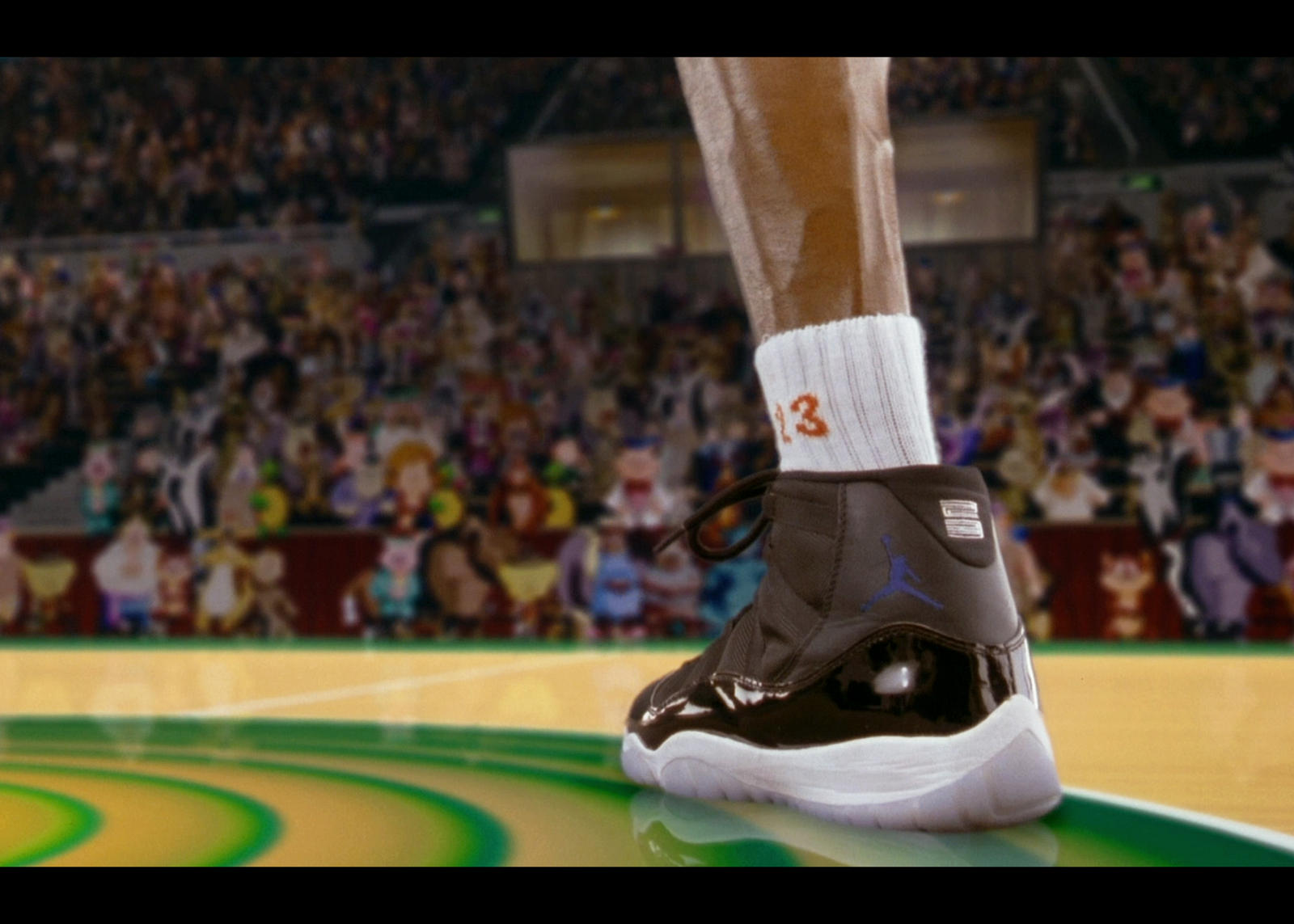 For the first time, both kids and adults were fascinated by a sneaker and not just for it's ability to enhance performance on the basketball court. Rather, the sneaker offered something far greater than transformative shoe technology. The Air Jordan XI was a cultural symbol. An artefact that was rich in basketball and film history.

They wanted a piece of Jordan's greatness that transcended beyond the basketball court.

They wanted to be part of something.

Today we call it hype but back then it was the mere feeling of belonging to something. And that something at the time was rooted by Michael Jordan's mastery - whether that be his dominance on the basketball court or his flair off it.

And that is what set the precedent for how shoes are received today.

You don't have to necessarily be the biggest Kanye fan to wear his shoes. Nor do you have to be a fashion designer or enthusiast to appreciate the OFF-WHITE x Nike collection.

Put simple, the Air Jordan XI was the pinnacle of shoes being more than something worn on your feet. On the back of the past ten models, the Air Jordan XI proved that shoes are a legitimate cultural symbol that can be appreciated by anyone.

Even recently in 2015, the shoe makes another cultural appearance in Creed. Whilst the feature was short lived, it was fitting. Sported by Adonis Creed Jr. (played by Michael B. Jordan) whose character is defined by overcoming doubters, the shoe is somewhat of a symbol for those fighting a battle. This sort of symbolic connotations resonates heavily with that of Michael Jordan's basketball career given how he returned to win three more championships after a short stint away from the game.

Such assumption makes sense. When asked about the significance behind the number 45 on the shoe, Senior Vice President at Jordan Brand believes that "No. 45 represents pushing past your own limitations or those that someone places on you."

With the shoe resonating this both on the court and in media representations whilst standing the test of time, it is hard to deny that the Air Jordan XI has a unique aurora about it that no other Jordan has. With all that has been discussed it's hard to find another Jordan model let alone sneaker; that is as rich in history as the Air Jordan XI.

The sneaker was a defining moment for Jordan's basketball career.

He played his best season (1995-96) in this shoe - leading the Bulls to a 72-10 regular season record and winning his fourth championship. And on top of that, was named in the NBA All-Defensive First Team whilst achieving the MVP trifecta across the NBA regular season, All Star Game and NBA Finals.

Technology wise, the Air Jordan XI defied the norms. Thanks to Hatfield's creativity, the shoe introduced patent leather and a carbon fiber shank on a basketball shoe for the first time ever.