Nike Air Max Tuned: The Other Side We Don't Know

Eshays. Lad. Fully sick. These are the infamous terms synonymous to the Nike Air Max Plus, at least in Australia that is. However, there is more to the shoe than the "Australian lad" stigma. With the OG colourways recently re-releasing, we decide to take a look at how this iconic shoe came to be. 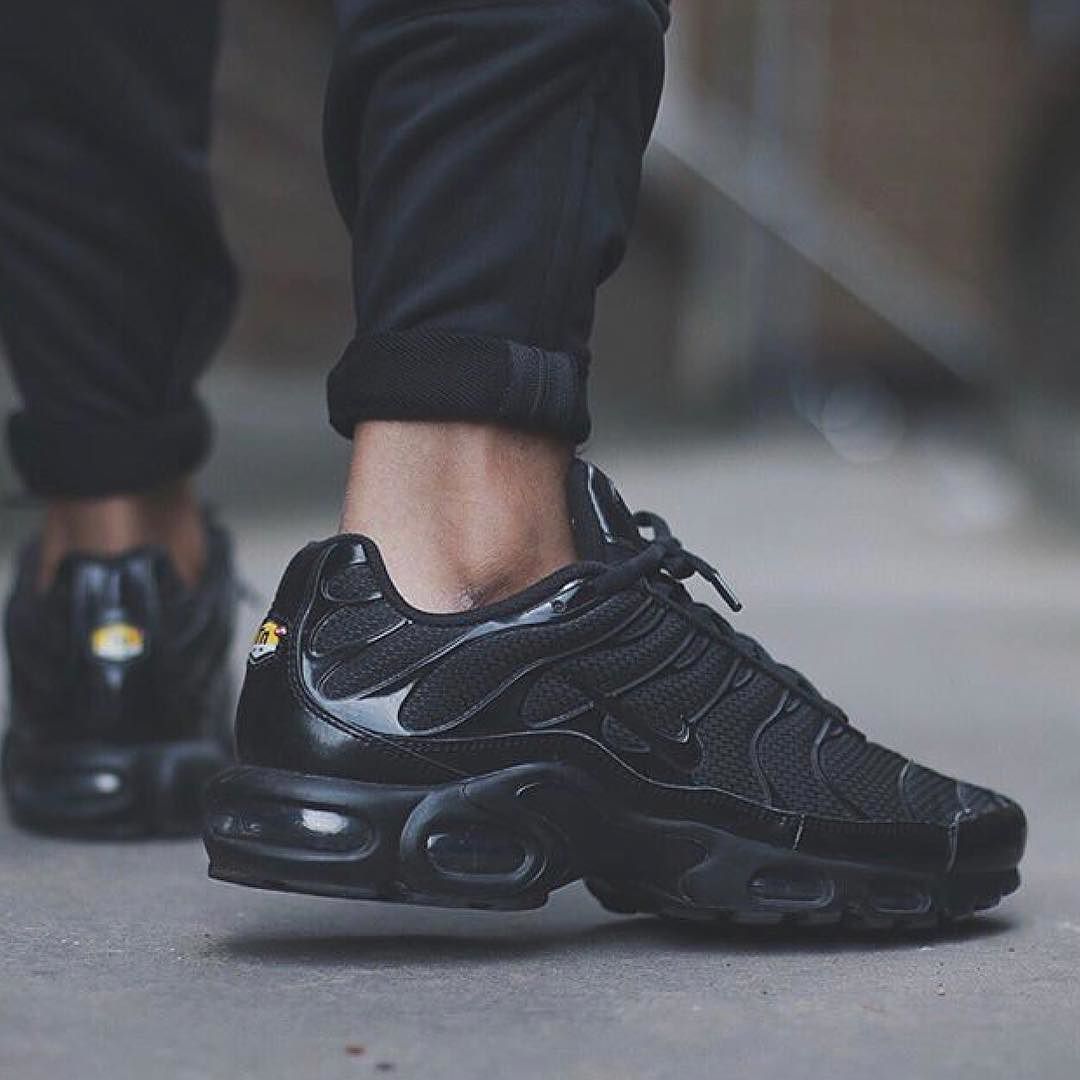 Released back in 1998, the Air Max Plus (also known as the Nike Tns) is best renowned for its Tuned Air technology which featured a system of Tuned pods that offered runners (yes people ran in these) high-performance impact protection. Designed by Sean McDowell, the shoe challenged many conventions at the time with its unprecedented manufacturing techniques that provided the shoe with a very unfamiliar aesthetic.

“I hung out on the Florida beaches and just thought and sketched — it was one of my most creative times.” 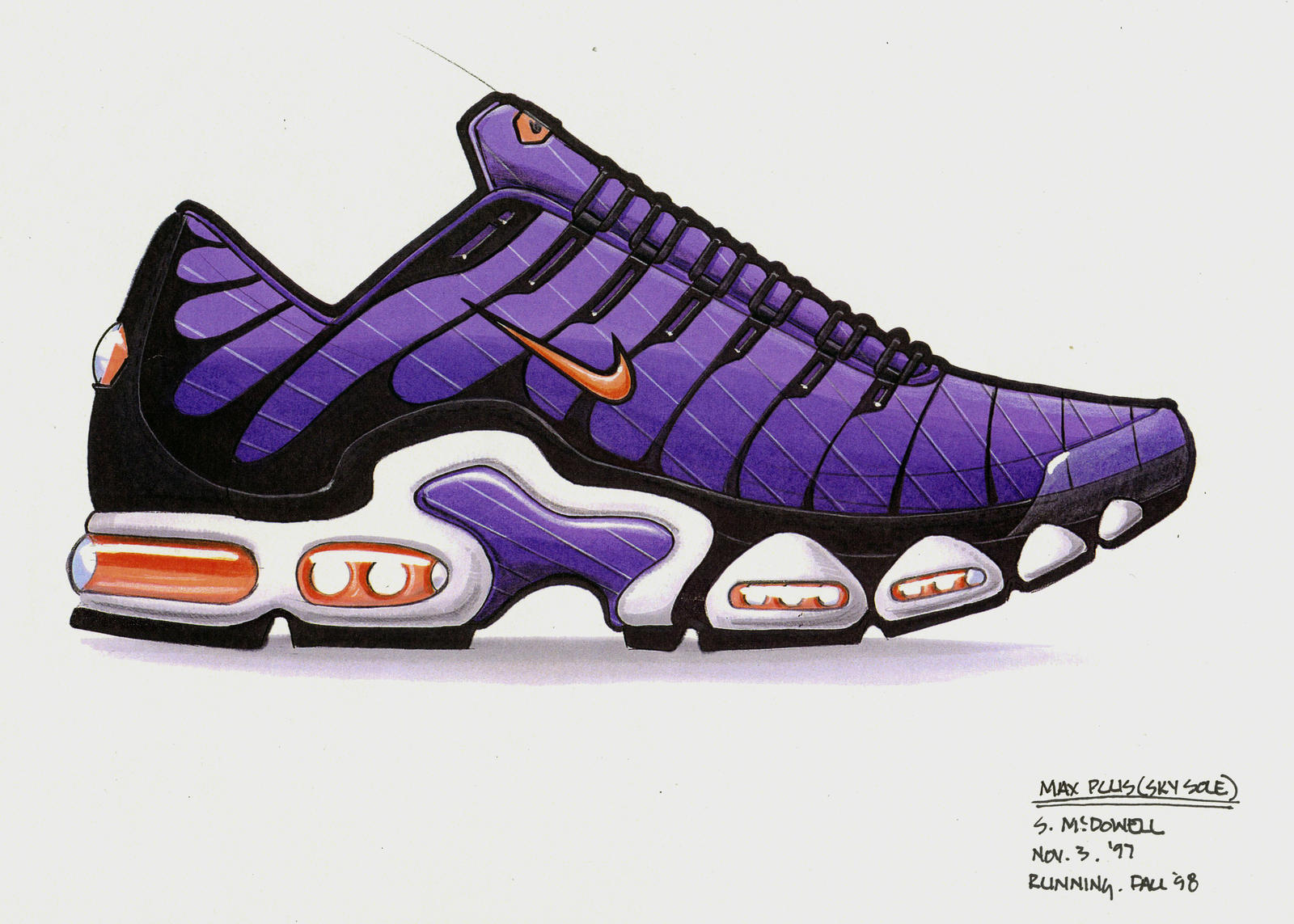 McDowell also comments that he wanted to put some emphasis on the top-down view. Whilst the palm trees were aesthetic on the medial and lateral sides, the designer believed it would be interesting to connect them on the top without actually doing so with a straight line. 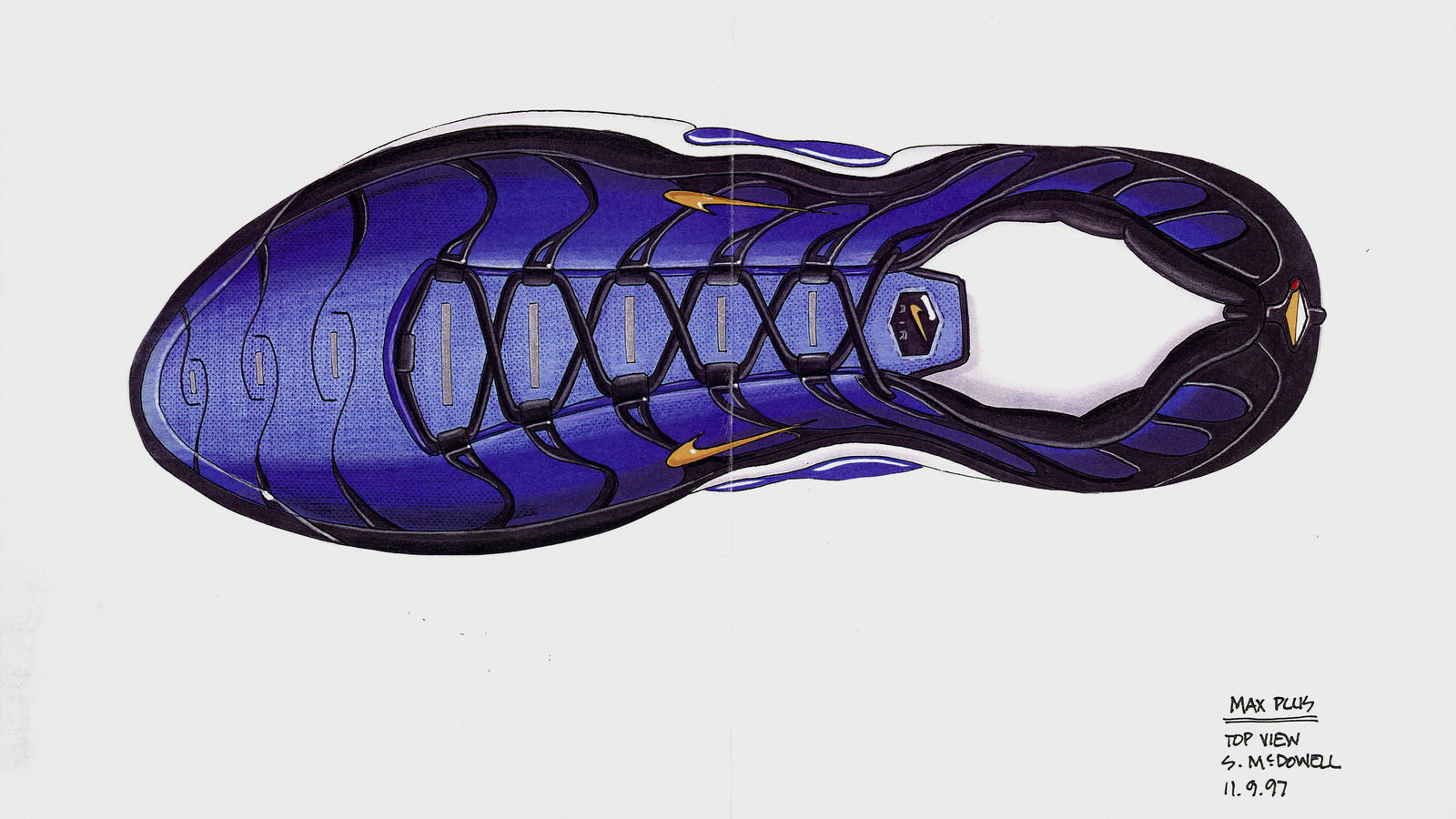 At the time, the shoe was created for running. This influenced him to incorporate many performance benefits which includes  flex grooves through the forefoot. Growing up as a runner and learning to run facing traffic, McDowell was inspired to maximise the reflectivity on the shoe. This lead him to put bars of reflectivity going all the way up the forefoot, the vamp and the tongue.

So inspired by the palm trees in Miami, the designer extended the stripes on the upper to the outsole -- as seen with the stripes in the shank. This shank that extends from the bottom of the sole to the midsole creates a separation between the front and back Air units and gives the shoe a distinct look. In France, the shoe is referred to as “la requin”—the shark shoe—but McDowell’s real inspiration was drawn from a whale’s tail. 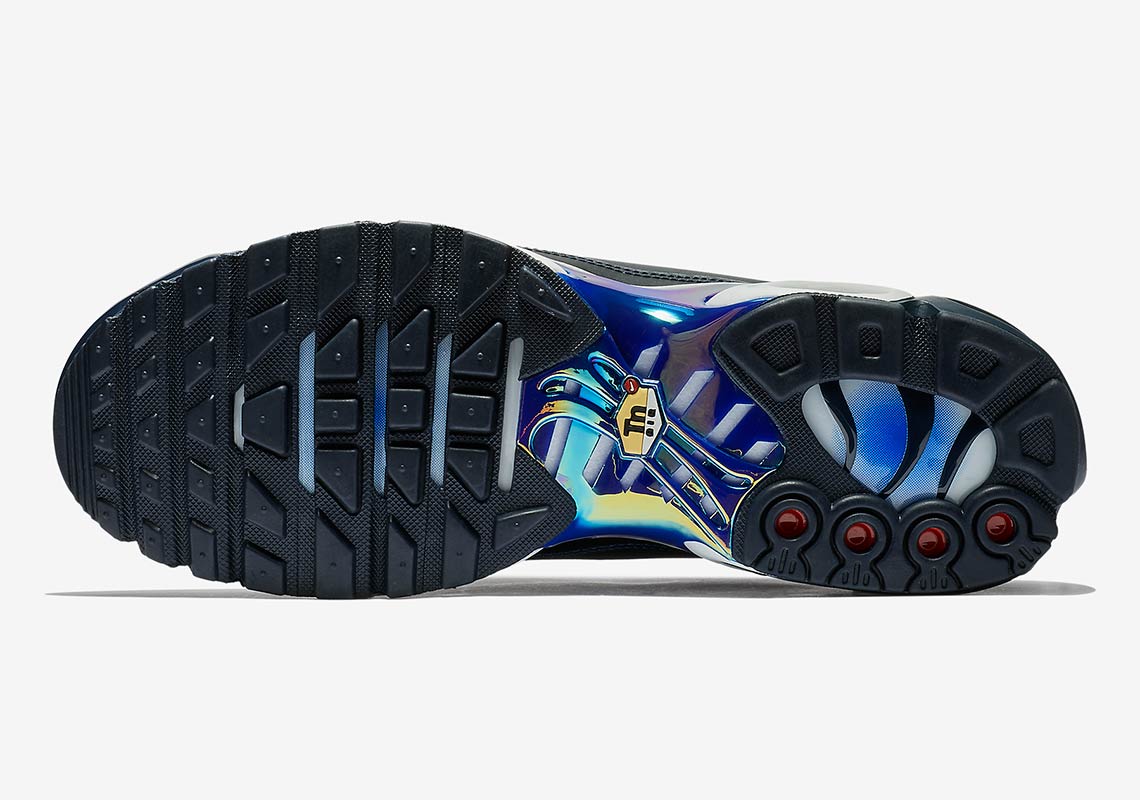 When asked about colour, McDowell refers to when he first heard the term "Sky Air" which was the name for a new Max Air innovation that implemented two opposing hemispheres. The term elicited visions of the many colourful skies he saw in Florida -- a sunset, a blue one and a purple one.

“We didn't have colour specialists, so the first three shoes are a really great part of the story...The first shoe was dusk, the second was almost all black with a little bit of red [they used reflective mesh from the Jordan XIII] to represent stars in the night sky, and the third was bright orange and yellow to depict sunrise the next morning.”

The shoe turned heads with its gradient pattern that at the time. When showcasing his faded designs, he was told that he wouldn't be able to find material like that. So how did he execute this?

Reminiscing on the fire-like fade on the Nike Flame spike which he ran in when younger, McDowell imagined possibilities. Known as sublimating, McDowell described the process as printing lighter tones of a particular colour with a darker tone of the same colour over it. 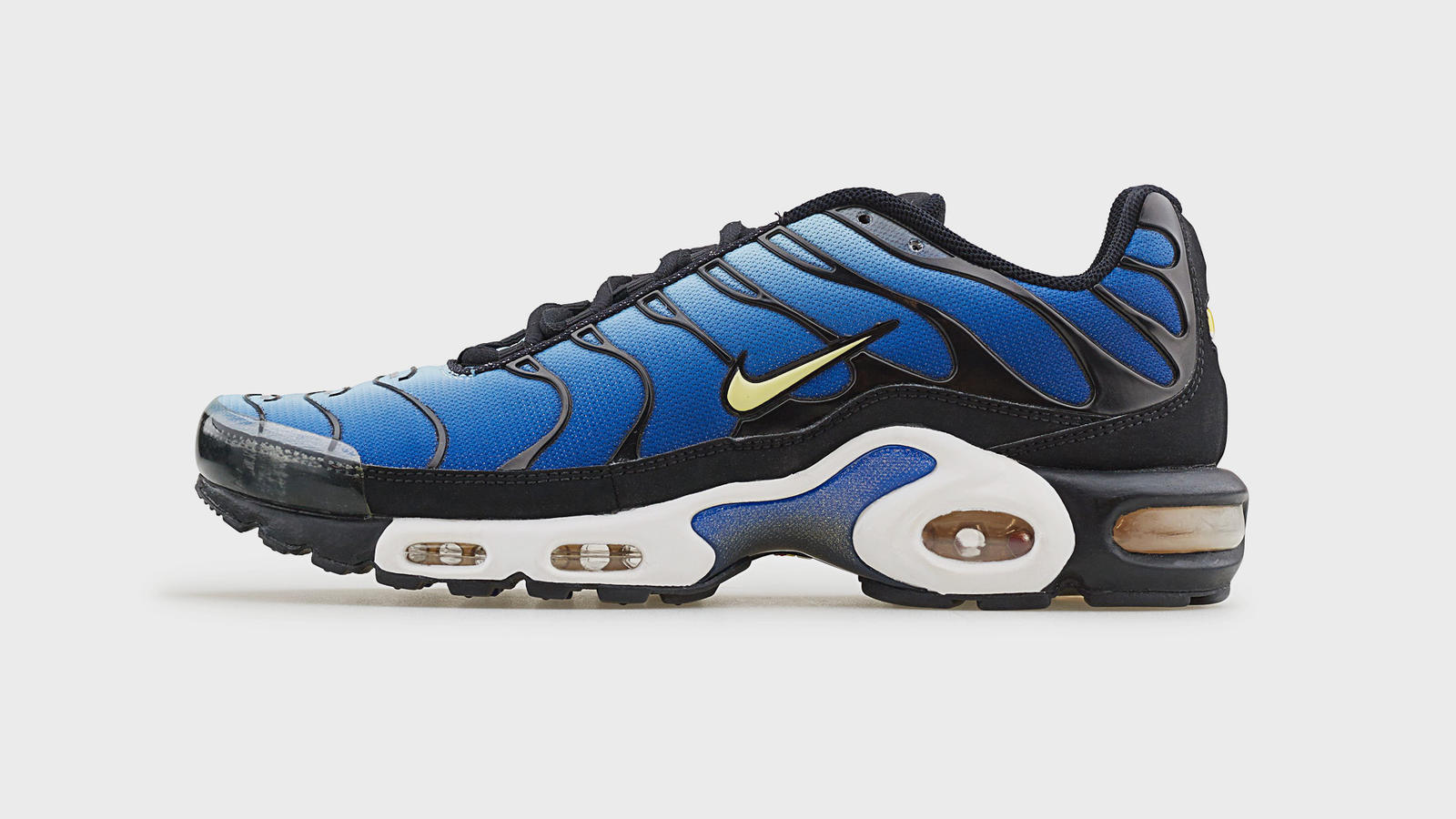 Despite it slightly resembling that of the Air Max 97, the Air Max Plus tick is quite unique in its own nature. And there's actually a story behind it.

The designer's lack of experience at the company is actually what makes the tick rather unique. Unlike your conventional Nike ticks, the Air Max Plus tick is known to be slimmer and longer than it should be. The reason for this? McDowell was not provided with a template for the logo.

As for the Tn Air logo, the hexagonal branding was a surprise to McDowell who at the time didn't know where to place it. However, after being told that the Tn Air logo was a big deal, he threw the logo on the heel and outsole. 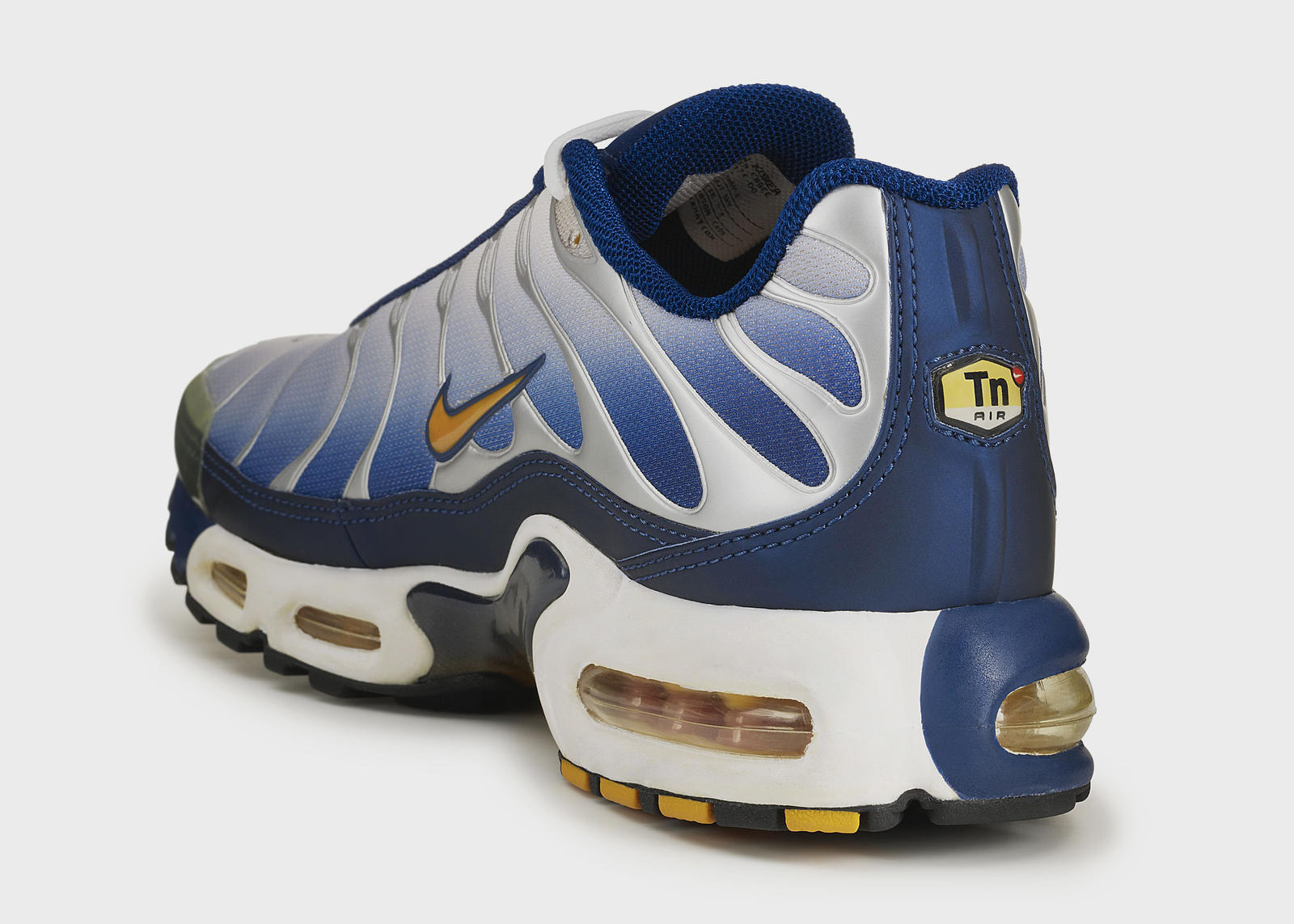 From dedicated ravers to streetwear enthusiasts, there is not a single individual in Australia who dislikes the shoe. Renowned for its aggressive aesthetic, the TNs when paired with a fresh pair of trackies and a bumbag made some noise; especially at your local train station.

However, it wasn't all love at the start. When the shoes first surfaced social media newsfeeds, there was a fair backlash from keyboard warriors and trolls alike, describing the shoes as being junkie and a reflection of "Eshays lad" culture. The tide turned and soon those who once criticised soon began to adore these shoes which is often recognised through lines such as "being fully sick/hectic". Available at Footlocker for $240, the TNs was (and still is) a prized item in the store. The shoes were a symbol of "thuggish anarchy" --  a subtle sign to your peers that you were doing well off the street. Rock these to school and you'll get praised. Rock these on the streets and you'll get necks turning.

However, what used to be perceived as a shoe worn by ravers and gym junkies is now an Australian icon appreciated by all. So strong of a symbol, that the international sneaker community acknowledges Australia to be blessed with Tn exclusives.

With recent images earlier this year of Drake wearing a pair of the Nike Air Max Plus 'Bat', the shoes are officially a fashion statement.

Despite a year of speculation that Drake was on the verge of leaving Nike, the Canadian star debuted a never before seen Tn model. Could this be Nike teasing a future favourite of the Tn model after a year of experimenting with other silhouettes such as the Nike Air Max 97?

Sure it may be too daring to envision an OFF-WHITE collaboration on the Nike Air Max Plus. But if there ever was a sneaker that would send the entire Australian sneaker community into a frenzy, it would definitely be the Nike Tns. And if the shoe was ever featured in an exclusive collaboration or reworked with luxury refinements; best believe it will forever change the associations of it being strictly a street shoe. The Tn As A Source of Inspiration

In celebrating the 20th anniversary of the Air Max 97 last year, the Tn was used to pay tribute to the Air Max 97. Whether it was sporting classic Air Max 97 colourways or creating fusion between the Air Max 97 upper and the Tuned Air sole, the Tn paid homage to its older counterpart.

Despite it not being a notable feature, the Sk logo on the Nike Air Max 97 SK was inspired by the Tn Air branding. By adopting the hexagonal shape similar to that of the Tn Air, Skepta paid homage to the popularity of the Tn in London.

To further exemplify the popularity of the Tn model in Europe, French website WAVE collaborated with sneaker customisers to honour Kylian Mbappé's World Cup performance. The shoe was chosen given the fact that it was released in 1998, the year France was crowned as World Cup champions in a convincing 3-0 win over Brazil. Unlike your typical Tn models, this exclusive custom features white, blue and red pops accented by a regal gold star on top of a leather upper. 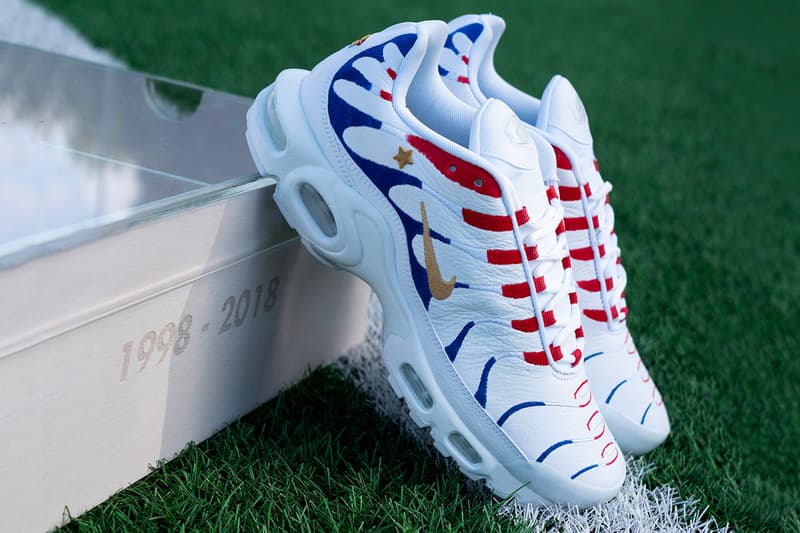 Before you get confused or excited, the model showed below is (unfortunately) a counterfeit. And whilst some designer streetwear collaborations have been a flop, this model is low-key eye catching. With the Tn making a slow entrance into the fashion scene amongst rappers like Skepta and Drake, perhaps luxury could be the next thing.

What makes the Tn so admirable in recent years has got to be how it's loved by all females. We typically see girls following the footsteps of their male counterparts for inspiration. You've seen it before, that cute hypebae on Tumblr wearing a Supreme hoodie with a pair of Air Jordans on her feet.

That isn't the case though with the Tns.

Looking back, we don't recall a sneaker ever before that has been worn so passionately by females. Whether it be showing off their Tns with their fresh set of nails or a designer bag, a fair majority of Instagram sneaker content consists of females in their Tns. With this kind of confidence, it's hard not to call them the tastemakers of Tns. It's an exciting time for the sneaker community.

We've been a longing for a movement like this for a while.

A movement where people gravitate towards a shoe not because of hype or resell value - but because of it's aesthetics.

A movement that is inclusive of females being tastemakers in the sneaker community.

Even better, this movement towards Nike classics and fan favourites like the Tn coincides with everything else that's been happening in the sneaker community. Following the release of the Union x Air Jordan 1 and its influence in bringing retro silhouettes back, it is hard to see why the Nike Tn won't do the same.

And as mentioned previously, as the model begins to drip even more into the mainstream, don't be surprised if Nike Tn collaborations become a thing in 2019.